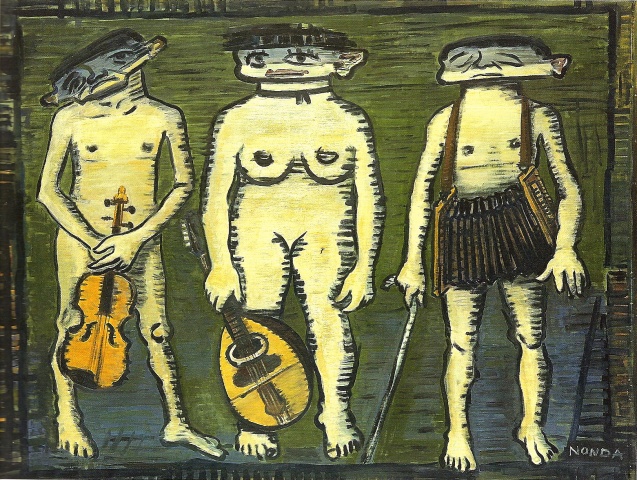 During this period, NONDA attempted to capture the subject’s emotions in his imagery. He produced a series of paintings executed with strong, sweeping brushstrokes and faces that implore the viewer to understand them. Often depicted partially nude, the figures expose their humanity in its totality. One of the paintings from this series, “The Musicians”, which was exhibited in the Salon des Independants in 1954 at the Grand Palais, was analyzed in the book NONDA, L’odysee d’un Peintre by Georges Picard. In the book, NONDA explains the painting by saying that he tried to create an eloquent expression of their sadness and solitude. “…look at their feet….I tried to express this in the simplest ways…and I retained their characters…even while deforming their poor bodies…I pitied them…believe me…they look like creatures from another earth but I kept their psychological traits…The woman keeps her coquetterie of a woman lost…the violinist is romantic in his way….his tilted head begs for pity of sorts…while the blind one is devoid of confidence…this is how I translate them…musicians who played their part in a shady café-concert and went their way…their sad misfortune exposed.” Picard closes the discussion by saying that NONDA essentially paints “ the force, the sentiments which exude profoundly from the faces, the bodies, the lights.”