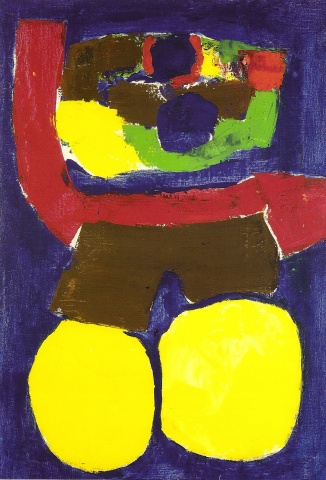 While little known in America, Greek painter and sculptor, NONDA (1922-2005), was a leading force behind some of the most fascinating art movements of the post-war period in Paris. His place in the post war Ecole de Paris ensured yearly exhibitions with the Charpentier gallery alongside Picasso, Leger, Miro, Chagall and many others.

In the early 50’s he pioneered a dramatic style which included the blood from cow spleens and charcoal as a medium. From the 1950’s onward, the use of blood was to be a major component in many works, culminating in his striking Spleen or ‘Sanguine” abstract expressionist series of the 70’s. The legendary art critic, J.P Crespelle, writes, “Just as Picasso had his rose period and his blue period, so NONDA will be remembered for his period of spleen.”

In 1960, with the personal support of the minister of culture, André Malraux, he organized a 24 hour one-man show under the arches of the Pont Neuf in Paris. His aim was to take the work out of the galleries where it was seen as a commercial product and make it available to the public. By consciously rejecting the constraints of the gallery establishment, NONDA reintegrated a tradition of public art we consider routine today.

He held three different Pont Neuf exhibits, the most famous, in 1963, contained a giant Trojan horse built of steel tubing, wood and newspapers, in which the artist lived for the duration of the show. In the last paragraph of Crespelle’s “Montmartre Vivant” a book which charts the major artistic figures of Paris’ Montmartre district, he concludes, “NONDA, the volcanic Greek painter (Greque volcanique), continues to hold true to the traditions of free and revolutionary painting at the summit of the old hill.”

Click on the thumbnail images for more info. by decade