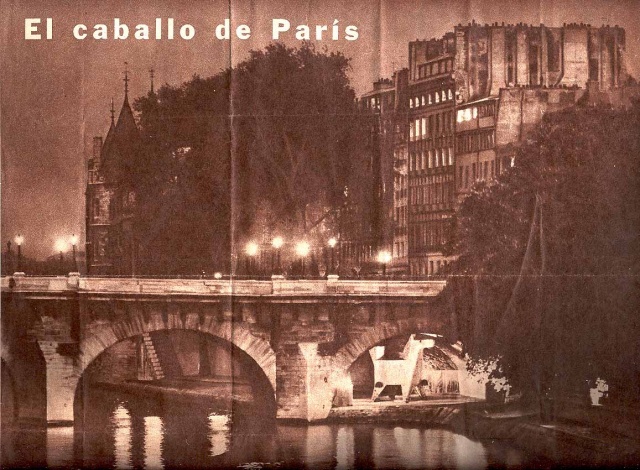 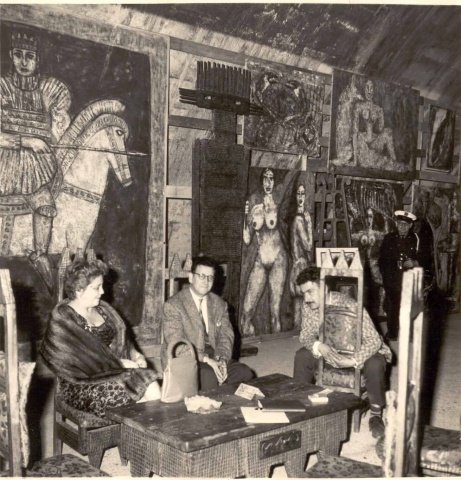 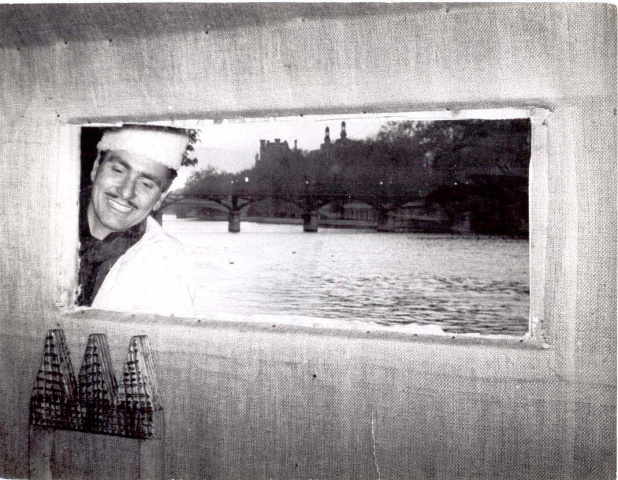 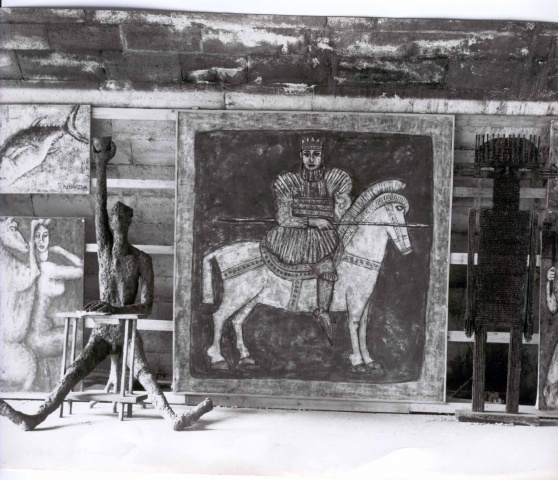 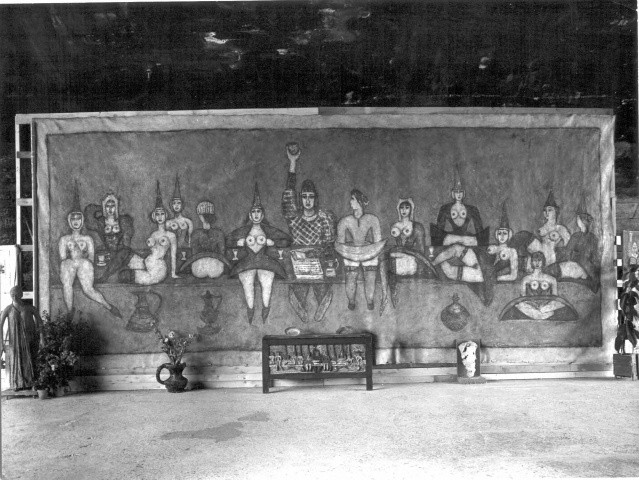 In 1960, with the personal support of the minister of culture, André Malraux, he organized, for the first time in three centuries, a 24 hour one-man show on the banks of the river Seine, under the arch of the oldest bridge in Paris, the Pont Neuf. André Malraux held a unique position in art politics at the time. Not only was he one the world’s great novelists and political thinkers, he also had control over France’s massive cultural budget, and with it the power to allow new ideas to flourish. When Nonda proposed using the arch of the bridge for his show, Malreaux reminded him that Boucher and Chardin had exhibited on the same bridge in the 17th century. His response was swift and liberating for the artist, “pourquoi pas?” He said, “C’est une ideé merveilleuse!” (why not? It’s a marvelous idea!) The exhibition was dedicated to the life and work of Francois Villon the medieval French poet. The huge canvas of the banquet dominated the show. Beneath it were other paintings, prints, carved chests, furniture and sculptures, all of which he had hand worked with original, non-power tools. Nonda’s first Pont Neuf exhibit marks a turning point in modern art exhibition--- the idea of the 24 hour show “en plein air”, an early form of “street art” which was not painted in the street but shown there. His aim was to take the work out of the galleries where it was seen as a commercial product and make it available to the people. By consciously rejecting the constraints of the gallery establishment, Nonda reintegrated a tradition of public art we consider routine today.

He held three different Pont Neuf exhibits, the most famous, in 1963, contained a giant horse built of steel tubing, wood and newspapers, in which the artist lived for the duration of the show. This horse, immediately called “the Trojan horse” by the press caused an overnight sensation in Paris. The show ran without interruption day and night---there were no hours, closing times or private showings. Articles appeared daily in newspapers around the world, in Russian, Italian, French, English, German, as well as television and radio coverage in Greece and France. The mayor of Paris made a personal visit, and thousands of people, from celebrities and reporters to riverbank drunks walked under the arches of the bridge hung with enormous paintings lit up at night by powerful spotlights. Under the massive stone arches of the oldest bridge in Paris, the Horse towered above an entire microcosm. The paintings surrounded the viewers on both walls which were also hung with giant painted platters and carved vases. Life-sized human sculptures and busts of plaster or wood stared out toward the river. All of this created an otherworldly atmosphere, an atmosphere in which the art was no longer something untouchable and distant but a space the viewers inhabited. Because he lived inside the horse for the duration of the show, he was there night and day, working, conversing with visitors and watching over his paintings along with the city-appointed guards. Because guests were able to sit with him in the medieval chairs at the hand carved tables and drink from the goblets he had cast in bronze, the exhibition was in some respects unofficially “interactive”. The Pont Neuf Exhibits were given official sponsorship by the Commitie des Fetes de Paris as annual artistic events supported by the city of Paris. In the last paragraph of Crespelle’s landmark book, (“Montmartre Vivant”) which charts the major artistic figures of Paris’ Montmartre district, he writes, “Nonda, the volcanic Greek painter (Greque volcanique), continues to hold true to the traditions of free and revolutionary painting at the summit of the old hill.”